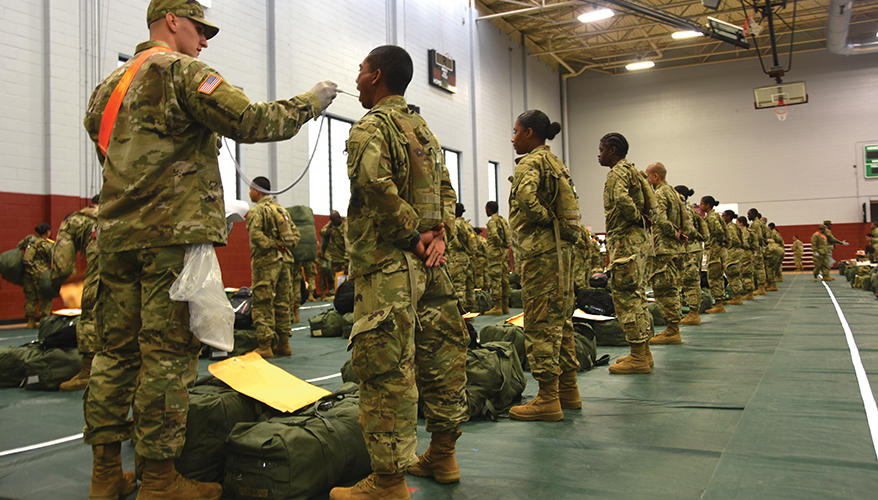 Army trainees are screened upon arrival to Fort Lee, Virginia.

The COVID-19 pandemic has raised questions about how soldiers will be able to prepare for war while implementing safety procedures. This has prompted the Army to revamp its training and further invest in new virtual reality technology.

“Because of COVID-19 and what we’ve had to experience over the past three to four months, we have understood now the power of distributed learning, training and connection; and also the power of what the synthetic training environment can deliver to our Army,” Gervais said at the National Training and Simulation Association’s Training and Simulation Industry Symposium, which was held online due to the ongoing public health crisis. NTSA is an affiliate of the National Defense Industrial Association.

Because of the pandemic, the service has increased its use of virtual training technology to account for social distancing procedures, she noted.

“They have turned to actual gaming technology,” Gervais said. “They are playing games to get through some of their training capability to synchronize some of their efforts.

We’ve also seen more use of the virtual capability to help units train, to help them continue preparations.”

The service is trying to bring its antiquated training capabilities into the 21st century.

“We definitely need help from our industry partners in this area because it is time to change a 1970s technology that has evolved over time,” she said. “It will no longer meet our needs and we’re looking for a revolutionized training capability for our live training environment.”

Over the last decade, the service has been making incremental changes to its training regime by adopting systems that address specific needs, Gervais noted. However, the Army is currently limited in its ability to train soldiers for combined arms operations, she noted. The development of a synthetic training environment can help the service better prepare for these tasks.

“We can’t effectively replicate the operational environment for the future” without new tools, she said. “Creating a synthetic training environment in which a unit may train will give back to the leaders some of the time they have spent in planning, preparing, executing and assessing training.”

The STE will have three baseline applications, which include the training simulation software, the training management tools and One World Terrain. One World Terrain is the service’s digital 3D representation of the operating environment, which can be used to replicate real-world locations around the globe where soldiers might have to fight.

“We need our partners to help continue to develop the STE at large and the content that we will need to train,” Gervais said.

One advantage of the technology touted by senior officials is its ability to facilitate a large number of repetitions, which might not be feasible in large live-training exercises.

“It is paramount that we develop a multi-domain operations training environment in which soldiers and leaders may attain the sets and the reps necessary to ensure success of their mission,” Gervais said.

To bring academia and industry together to work on the STE, the Army has opened a technology integration facility. The technologies are brought to the facility and assessed using the synthetic training environment architecture, she said. The service has been holding web meetings to discuss potential new systems for the effort.

“It will be focused on examining capability gaps, innovating and integrating solutions from across DoD and industry and demonstrating those solutions for exploitation by our material developer,” she said.

Col. Marcus Varnadore, project manager for the synthetic training environment, said the service is also developing a live, virtual and constructive-integrating architecture that will help centralize the service’s technologies.

The effort is a push to replace four out of five of the Joint Readiness Training Center’s towers and install a new network infrastructure. A fifth tower will also require a rework of the foundation prior to adding new antenna systems.

Meanwhile, Col. Corey Hemingway, project manager for cyber, test and training, said the service is embarking on a program called cyber training, readiness, integration, delivery and enterprise technology, or cyber TRIDENT. It will be available to all the military services.

“Cyber TRIDENT is a flexible and rapid contract vehicle designed to serve the cyber training community with a broad overarching scope of cyber training, product development, integration, operations [and] training as a service, sustainment, and associated capabilities,” Hemingway said.

Plans call for awarding a $957 million contract in the third quarter of fiscal year 2021, according to his presentation. A request for proposals was released in June.

A large part of the effort includes the persistent cyber training environment, according to the RFP. The training platform will allow users to participate in various exercises such as team certifications and mission rehearsals, according to the Army.

Another program in the works includes the intelligence electronic warfare tactical proficiency trainer increment II, Hemingway noted. The system is designed to allow military intelligence analysts to practice working with data in a simulated environment.

“This contract opportunity provides high-fidelity crew, individual and collective multi-intelligence discipline training across the intelligence enterprise,” Hemingway said. “It supports the military intelligence training strategy with live, virtual and constructive simulations across the broad span of the environments.”