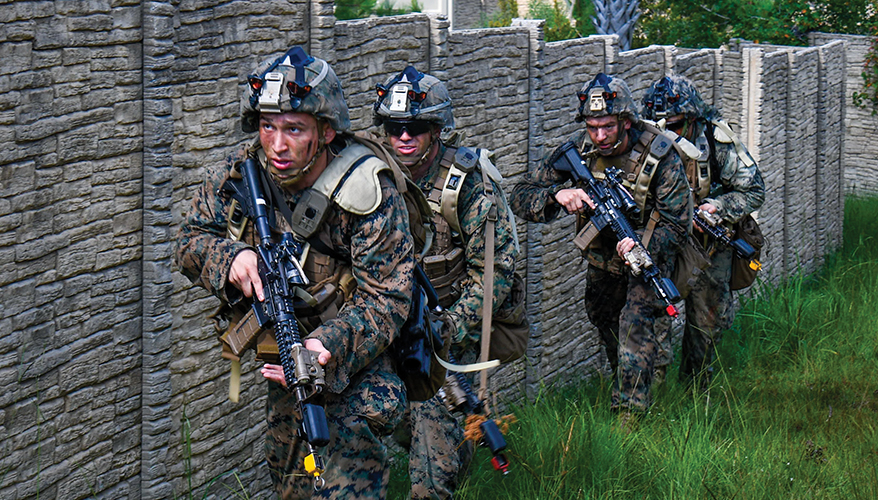 Orlando, Fla. — The Marine Corps is adjusting its training approach as it pursues expeditionary advanced base operations, officials said Dec. 1.

Expeditionary advanced base operations, or EABO, is a form of expeditionary warfare that according to the service "involves the employment of mobile, low-signature, operationally relevant, and relatively easy to maintain and sustain naval expeditionary forces from a series of austere, temporary locations ashore or inshore within a contested or potentially contested maritime area in order to conduct sea denial, support sea control or enable fleet sustainment."

“If we’re going to do EABO … with small teams, squads, platoons [and] companies spread out and not mutually supporting, that’s a different Marine Corps than we have today,” Alford said during a panel at the National Training and Simulation Association's annual Interservice/Industry Training, Simulation and Education Conference in Orlando, Florida. NTSA is an affiliate of the National Defense Industrial Association.

The service is still "trying to figure out” how to conduct that training, Alford said.

Because EABO requires small teams to have high levels of situational awareness, reliable networks are key to its success, officials said during the panel discussion. That also translates into training, said Brig. Gen. Matthew Mowery, assistant deputy commandant for aviation.

For Marine Corps pilots, Mowery said the service has tripled the number of training simulators it employs in the last decade and is now working on obtaining more for maintainers.

Along with better connectivity, Renforth noted that the Corps needs to improve how it mimics real-world threats in simulated environments.

“What we are doing now is, we’re trying to create a pacing threat on a shoestring,” Renforth said. “We know what the pacing threat looks like. We know what effects they can put on our command-and-control systems. But then what we’re doing is getting surrogates.”

To improve the Marine Corps' readiness for more modern threats, the service is embracing a live, virtual, constructive paradigm which leverages virtual and other computer-generated components to replicate live training. The service awarded a $128 million contract to Saab in June to produce the system, which will allow Marines to train against live, role-playing foes in realistic, simulated environments.

“It’s that ability to have that blended environment that incorporates all of those things across the Marine Corps and allow that Marine to achieve and sustain combat readiness,” Fraley said.