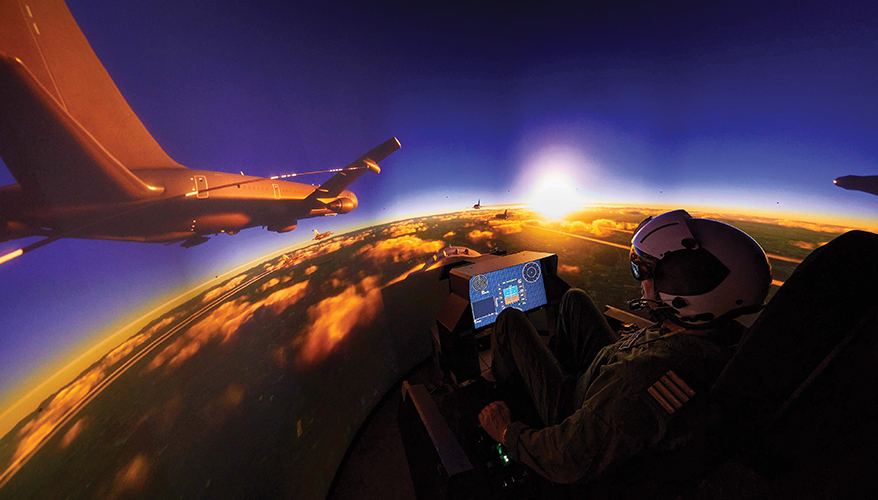 The CAE Prodigy image generator can create highly realistic graphics with the Unreal Engine, a gaming engine made by video game and software developer Epic Games.

In November, CAE debuted the technology during the National Training and Simulation Association’s annual Interservice/Industry Training, Simulation and Education Conference in Orlando, Florida. NTSA is an affiliate of the National Defense Industrial Association.

Integrating Epic Games’ Unreal Engine gives CAE the ability to enhance a simulation’s realism and immersiveness, CAE Spokesperson Chris Stellwag said on the sidelines of the conference. The new engine allows the company to create high-scene density, enhanced lighting and special effects in its simulations.

“Specifically for things like fighter training tasks — when you’re doing things like air refueling or formation flight — the fidelity and the realism of the virtual world is pretty critical,” he said. “Those kinds of training tests are very expensive to do and sometimes potentially dangerous, so the more you can do that in a virtual world to ready the pilots … the better.”

The company demonstrated the image generator with its e-series MR Prodigy Visual System, a fighter and jet training simulator that consists of the image generator, projectors and a dome image display. While the simulator showed graphics in a 225-degree display during the conference, Stellwag noted that it can also be set up for 360-degree display.

Kshitij Singh, a project manager at CAE, said that the system is compatible with 8K display resolution projectors, meaning the width of the image can reach approximately 8,000 pixels, and 120 hertz operations that refresh the image 120 times a second. This helps the simulator create a smoother rendering and clearer images.

Singh noted that these are the new standards for displaying images.

“Customers are looking to leverage changing technologies at a lower cost of ownership,” Singh said.

The new image generator can integrate with CAE’s existing databases — such as those already sold to the U.K. Royal Air Force and Qatar Emiri Air Force — which allows customers to upgrade their systems without brand new databases, according to a news release.