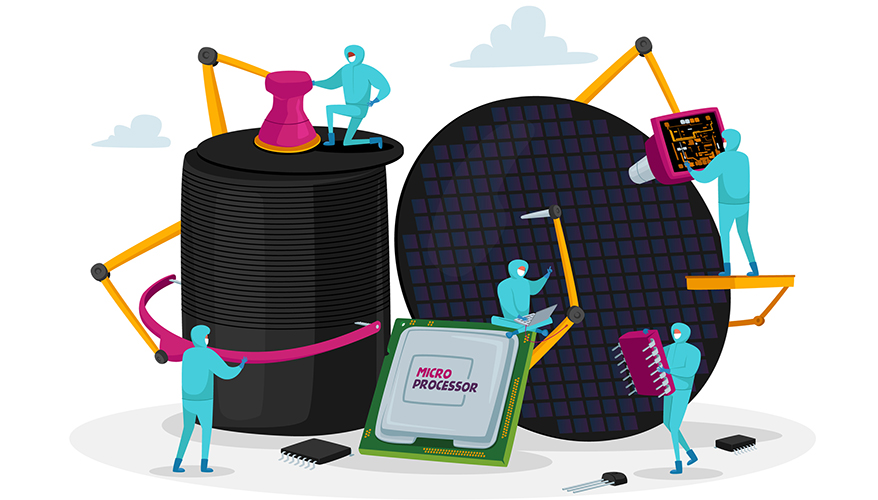 President Joe Biden in August signed the CHIPS and Science Act into law. This act, which sets aside $52 billion in government subsidies to bring semiconductor manufacturing to the United States and away from current East Asian production hubs, marks a significant milestone in strengthening U.S. technological competitiveness.

However, as significant as these investments are, additional action is required to ensure semiconductor companies have the workforce they need to expand domestic production. Here, U.S. allies and partners can help.

While the United States pioneered chipmaking, domestic production has waned in recent years. Since 1990, U.S. semiconductor manufacturing capacity has dropped significantly. During this same period, these chips have become essential to American life. Semiconductors not only underpin daily electronics, from cell phones to cars, but have military applications that pose critical national security threats if there is a chip shortage.

The CHIPS Act is designed to shore up U.S. vulnerabilities. By increasing domestic manufacturing of semiconductors, the United States aims to become more resilient to supply chain disruptions and the significant security implications that come with them, like those that occurred during the COVID-19 pandemic.

Further, as China steps up its aggression toward Taiwan — where a vast majority of the world’s most advanced chips are produced — Washington feels pressure to build resiliency in the event of East Asia production grinding to a halt.

While the CHIPS Act is a significant step in strengthening supply chain security, U.S. capacity to manufacture chips faces an unexpected barrier: human capital. For high-tech industries, a small yet critical core of high-skilled workers is essential. However, decades of declining investment in science, technology, engineering and math education have produced a critical shortage of qualified workers.

In 2015, White House economic projections estimated a need for one million more STEM professionals in the United States for the country to maintain its preeminence in science and technology. The nation missed this mark, and the demand for STEM professionals has only increased.

Semiconductor manufacturers are grappling with an insufficient supply of workers now. In August, the Taiwanese Semiconductor Manufacturing Corp. was forced to delay the opening of a chip manufacturing plant in Arizona by six months due, in part, to labor shortages.

As companies decide whether to pursue government subsidies through the CHIPS Act, the availability of skilled labor will be a central consideration in their process. Washington’s investment through the act will not pay off unless it addresses the talent bottleneck.

Boosting the talent pool will require both long-term and short-term action. Long-term efforts must focus on funding STEM education and, in effect, revitalizing the U.S. research and defense industrial base. Throughout history, federal support for research and development has fostered a pipeline of innovators that has changed the tide of war and propelled economic and technological growth.

The government’s drive is needed again. By expanding STEM scholarship opportunities and boosting federal training programs to meet the demands of semiconductor companies, the nation can make strides toward closing the labor supply gap.

At the same time, more immediate solutions are necessary. While there are not enough native-born Americans equipped with the skills to meet this labor demand, the United States continues to educate and graduate foreign nationals who have the needed skills. Allowing these students to stay in the country could help alleviate the labor shortages that semiconductor firms face.

In Ohio, for example, where Intel has pledged $20 billion to build two new plants, foreign-born workers in chip-making occupations constitute 10 percent of the labor force, double the state’s average immigrant share. As more companies shift manufacturing back to the United States, thousands of new jobs will remain vacant unless the industry is empowered t0 retain foreign talent.

In addition to filling the current labor gap, smart immigration reforms can also advance U.S. geopolitical goals. Prioritizing citizens from like-minded countries, such as India and Japan, could further demonstrate Washington’s commitment to allies and partners while boosting the labor supply.

Now that President Biden has signed the CHIPS Act into law, semiconductor companies will decide how and whether to leverage the subsidies set aside to boost domestic chip manufacturing. Their decision to do so rests, in part, on the availability of qualified workers.

While the CHIPS Act is a first step in bolstering American competitiveness, more work is needed.

Emily Ashbridge is a junior fellow at the National Defense Industrial Association.