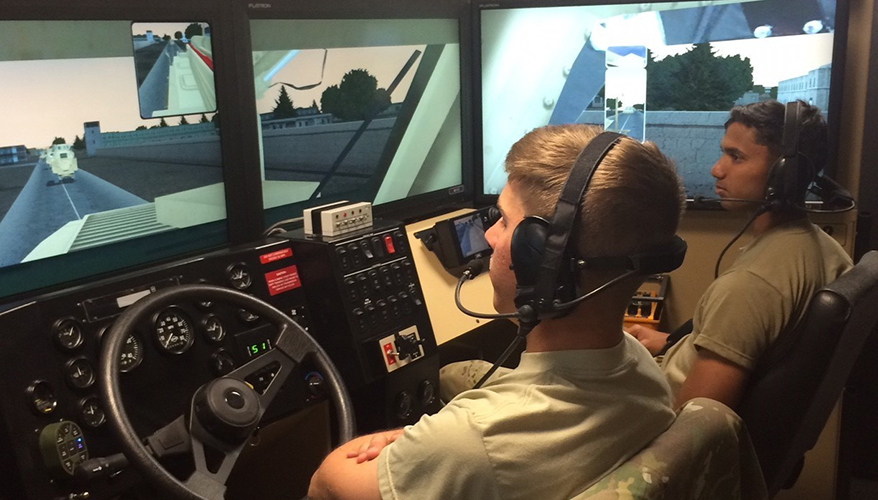 ORLANDO, Florida — With the demand signal for joint live, virtual and constructive training only increasing, the military services are racing to build modeling and simulation capabilities. Ensuring that simulated training is interoperable across the services and partners is no easy feat, military leaders said Nov. 30.

Service officials listed several barriers to interoperability — such as classification, data standards and national caveats — during a panel discussion at the National Training and Simulation Association's annual Interservice/Industry Training, Simulation and Education Conference in Orlando. NTSA is an affiliate of the National Defense Industrial Association.

“I think what we learned this week is that the services with their Title 10 responsibilities are moving forward as they should be,” said Col. Stephen Banks, chief of the Joint Staff Environment Operations Division.

“And we need to now take a look at what they have developed with a forward-looking lens and ensure that the guidance that we have doesn't only apply to today but helps them work together in the future,” he said.

The joint training synthetic environment working group that he leads met shortly before the panel discussion, he noted.

“For those who weren't there, just know that from the joint and the Department of Defense level, we're looking out across and have acknowledged that there's a problem with our simulations, our ability to model the current environment, and that we have a way ahead,” he said. “And as a couple of couple more decisions are made, we can take an approach to solve some of those gaps.”

Recently, the department announced the formation of a three-star level military training executive steering group designed to oversee the working group, which works at the action-officer level. “Now there is that oversight, that if we can't come to a consensus, somebody can help us find consensus,” he said.

The Defense Department spent the last 20 years fighting a different fight, which is one of the reasons the department and services have been slow to focus on developing data, platform and network standards for modeling and simulation, he said.

Now, the Air Force, Army and Marine Corps are working on their next generation of constructive simulations to address the next fight. “What an opportunity to — from the beginning as we're working on requirements, documents — have that work together,” he said.

While there are efforts to coordinate and share information about modeling and simulation developments, the services are still largely moving out individually. It’s not clear yet that any service has advanced to a point where their approach and technology should be adopted by the rest of the services, he said.

“I know that the Air Force tends to be the first with a lot of data work,” he said. “They have a lot of terrific data folks that they spend a lot of time thinking about how they work their data because of the criticality of data to a lot of their operational systems pulls over their modeling and simulation systems as well.”

Data is the foundational challenge to addressing the barriers to interoperability, he said. “If we get data standards correct, and including classification marking of data, then it enables some of the classification discussions.

“So, for example, in a multi-level secure network architecture, if data is properly tagged and we have varying security clearances, and we log on to a network, we would only see what we are allowed to see,” he continued. “In a future modeling simulation tool, then we could be in the same simulated environment, but see the fight slightly differently based on the things that we are allowed to observe within the simulation.”

The next obstacle to tackle is related: the policy of sharing capabilities among partners and allies. “Whether it's us or one of our partners having exquisite capabilities that may not be something that they care to reveal at a given time.”

Still, it is imperative to train with allies, he said. “I see it kind of as a balance amongst those different things that we have to figure out how to best achieve commander training objectives, protect capabilities that we need to protect, while involving our allies and partners and training with them along the way.”