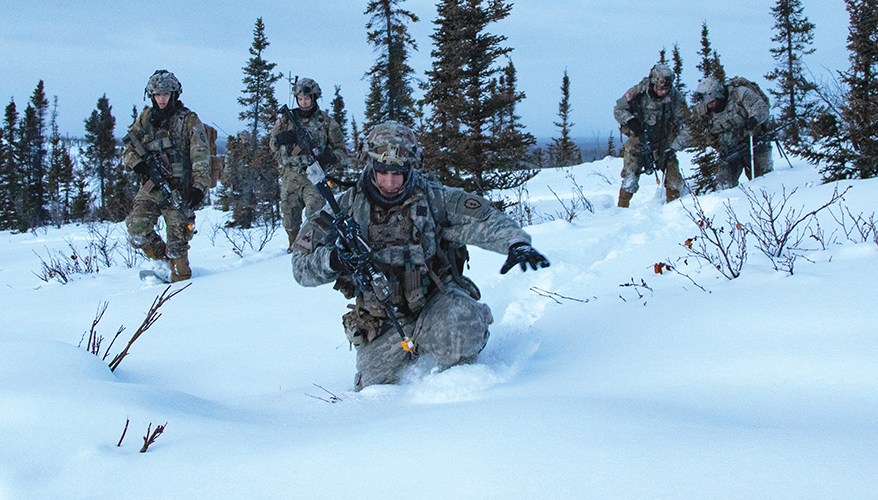 PARIS — After two decades of fighting wars in the Middle East and South Asia, the U.S. Army is rebuilding its capabilities for the austere conditions of the Arctic. The service is looking to its international partners as it seeks to regain its footing in the revived operational environment.

Army leaders from the United States, France and Finland gathered during the Eurosatory defense exhibition in Paris recently to discuss the importance of the Arctic and how each country is preparing for operations in the region.

The Arctic has regained prominence as a strategic environment for the Pentagon and its allies in recent years due to increasing levels of military and economic activity from Russia and China in the region, according to the Army’s Arctic Strategy document released in 2021.

Both countries “have developed Arctic strategies with geopolitical goals contrary to U.S. interests. Russia seeks to consolidate sovereign claims and control access to the region. China aims to gain access to Arctic resources and sea routes to secure and bolster its military, economic and scientific rise,” the document states.

Titled, “Regaining Arctic Dominance,” the Army’s newest strategy document for cold-weather operations seeks to adapt the service’s force postures, training methods and equipment for operations in the region, which have greatly diminished in the last 20 years during the post-9/11 wars, said Maj. Gen. Peter Andrysiak, deputy commander of U.S. Army Europe and Africa.

Now, the service wants the soldiers specifically trained, equipped and sustained to deploy and fight in extreme cold and mountainous conditions anywhere in the world at a moment’s notice.

“We have a significant gap in operating in areas of extreme cold, … in high levels of snowfall and in mountainous terrain,” he said during the discussion, which was hosted by the Association of the United States Army at the exhibition. “It’s a pretty lofty goal, considering where we are.”

There are several challenges unique to the Arctic the service will need to address as it gears up for action in the region, according to the document. Beyond freezing cold temperatures, the Arctic’s weather can change unexpectedly. The region is remote, experiences long periods of darkness and extended daylight that influence operations and has terrain that changes drastically with the seasons.

“This is not operating off of roads and fixed infrastructure. This is going into very remote locations that are pristine and untouched,” Andrysiak said.

To understand how to deploy and fight in these unpredictable conditions, warfighters need first-hand experience in that environment, said Lt. Gen. Seppo Toivonen, former commander of the Finnish army.

“When it comes to environmental conditions, there is an age-old saying that is ‘train as you fight.’ When we speak about the Arctic, you also have to mention — train where you are going to fight,” he said.

As an Arctic nation, Finland ensures almost all of its soldiers are ready to deploy in the region and can use the appropriate equipment, Toivonen said. Twice a year, the country’s army also runs a large combined-fire exercise in the Lapland region — which is within the Arctic Circle — to both train and test the service’s capabilities, he added.

Alongside Sweden, Finland is poised to become the newest member of NATO.

Nations outside of the Arctic can take advantage of domestic terrain with similar conditions in order to learn how sub-zero conditions will affect their equipment and improve skills, such as moving around using skis or snowshoes and shooting artillery when temperature and air pressure are low.

For example, France has both permanent and nonpermanent live-firing ranges in the Alps mountain range that are a unique feature to the region, said Maj. Gen. Pierre-Joseph Givre, head of the doctrine directorate of the French Army.

“We have lots of big areas, and we can fire with all the calibers,” he said. “We can deploy a brigade-sized unit with live fires, and it’s outstanding for Western Europe.”

The French army also has infantry forces that are highly specialized for mountain-based operations, Givre said. Because of the cold weather, rough terrain and high altitude, the soldiers in this brigade attain highly specialized skills, he added. That includes mountain climbing, skiing and cold-weather survival skills such as how to build igloos for shelter.

While the U.S. Army cannot give specialized skills for the Arctic to every one of its soldiers, it is revamping its training for operations in Alaska and high-altitude regions at a scale that has not been done in more than two decades, Andrysiak said. Then, soldiers can gain first-hand knowledge of how the environment affects their equipment, operations and themselves.

Up until the 1990s, “they put 20,000 soldiers in the field in the dead of winter — and you’re talking about ranges of minus 30 to minus 60 with no issues,” he said. “They were equipped, they were trained and there was an ethos that was built into the organization.”

Before recent efforts to boost the Army’s presence in the region, soldiers weren’t getting trained in the Arctic, but instead sent to completely different environments to learn skills, Andrysiak said.

The force structure is already making adjustments. In June, the service reactivated the 11th Airborne Division in Alaska — the first time the Army has activated an airborne division in 70 years, according to the service. Its comeback is meant to create a single mindset and ethos around cold-weather operations — a crucial component to soldier morale when stationed in harsh environments, Andrysiak noted.

The 12,000-soldier unit will serve as the Army’s experts for Arctic operations. Special emphasis will be placed on dismounted and Arctic mobility, as well as the capabilities needed for sustained operations in cold weather.

“Now, they stay in Alaska and the combat training centers come to Alaska, which means they now live and train in the environment year round. There’s nothing that pulls them out,” Andrysiak said.

The Army has also adjusted the agenda at the Northern Warfare Training Center at Fort Wainwright, Alaska — the service’s only cold-region training facility — to cover more topics and meet the demand of the Arctic’s growing importance, he added.

In addition to improving domestic training, the service will be partnering with allies to conduct joint exercises where nations can learn from one another and strengthen interoperability.

Andrysiak pointed to the annual airborne operations exercise Swift Response led by the United States. Intended to show how soldiers can deploy alongside European allies at a moment’s notice, this year’s exercise included paratroopers stationed in Alaska that flew over the North Pole and dropped into Norway, the first time an Army unit has demonstrated the ability to deploy from and into the Arctic.

The United States must foster partnerships not only with Canadian members, but also with Japan, South Korea and Arctic nations in Europe to continue these exercises, Andrysiak said.

Once basic training for the Arctic conditions is done, the Army can begin training soldiers at more specialized skill levels for longer durations. Live testing and experimentation will allow the service to determine the right equipment and formations that will shape its cold-weather operations, Andrysiak said.

The addition of the airborne division means the Army will need to adjust its equipment and capability requirements, Andrysiak noted.

For example, the service announced it is moving armored Stryker combat vehicles out of the region by the end of the summer due to their poor performance in the snowy Arctic.

Andrysiak noted that the Stryker “was never the platform to operate in this formation.” The Army is working with its allies and partners to understand what type of vehicle will be needed to fill the Strykers’ gap, he added.

In the meantime, the Army is acquiring a cold weather, all-terrain vehicle, or CATV, to replace the decades-old Small Unit Support Vehicle.

The service is looking for an amphibious vehicle that can operate in extremely cold temperatures and across multiple terrains, and hopes to choose one of two prototype vehicles made by BAE Systems or the Oshkosh Defense-ST Engineering team by the end of the summer.

Beyond mobility, the service is looking to improve on other equipment that is especially challenging to field in extreme conditions, from artillery to electromagnetic capabilities. According to the Army’s Arctic Strategy, all equipment for Arctic-capable units must be able to perform at temperatures down to minus 65 degrees Fahrenheit for multiple days.

“The problems don’t start at 32 below zero, they start at 32,” Andrysiak said. “There’s going to be some key design features to go after in that particular organization.”

To succeed in the Arctic, militaries need to have a controlled air domain, long-range fire capabilities and situational awareness tools for target acquisition, Toivonen said. He also noted personal equipment like light night-vision optics and camouflage are just as crucial.

“That makes a better combat environment,” Toivonen said. “Everything that keeps you alive is important.”

One of the U.S. Army’s tenets for future Arctic operations is establishing multi-domain operations that can support these kinds of capabilities, Andrysiak noted. This includes reviewing the service’s space-based and cyberspace assets, the service’s Arctic Strategy stated.

The service will also work with its combatant commands and partner nations to improve its communications infrastructure and mitigate harmful effects from solar weather patterns, to the strategy stated.

Part of that development means the Army must work closely with industry that already has the technology the service needs to operate, project power and operate in harsh cold-weather conditions, Andrysiak said.

“They already exist here with industry. They’re out there and it’s just a matter of procuring the equipment and understanding what’s the right equipment to put into our formations,” he said.

While the Arctic region can present a host of challenges for military operations, Givre noted that the arena gives allies an opportunity to put pressure on Moscow and its cold-terrain capabilities. Given the difficulties it has encountered in its invasion of Ukraine, Russia will likely have even more hurdles in the polar arena, he added.

“I think this is … the weak belly of the Russians,” he said. “We consider them very strong in this area, but I think they are not as strong as they should be.”