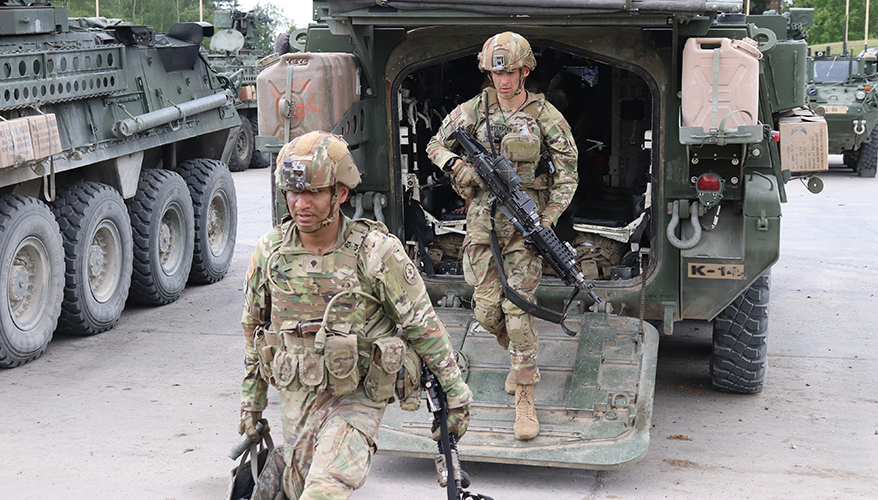 The Army conducts the Network CS23 Ops Demo in Germany.

FORT MYER, Virginia — Bullets whizzing through the air. Missiles launching through the skies. But what the Army thinks will make all the difference in warfare against technologically advanced adversaries is an invisible network that links every soldier, commander and weapon in the field.

After the Army finished its critical design review for its second stage of network capabilities in April, the service is looking toward two major operational demonstrations of its tactical network this year that will collect additional data needed for fielding it more widely.

The network is a “cornerstone” not just to the Army’s operations, but also to the domain operations across the joint force, said Brig. Gen. Robert Collins, program executive officer for command, control, communications-tactical, or PEO 3CT.

The joint all-domain command and control concept — the Pentagon-wide effort to connect sensors to shooters more quickly also known as JADC2 — is supported by ongoing technology developments, he told reporters at a recent Army technology exhibition at Fort Myer, Virginia.

“In previous wars, the difference between a good decision and a bad decision may be minutes,” he said. “In the future battlespace, that decision … may be seconds or milliseconds.”

The Army network modernization strategy calls for constantly improving in iterations. The first capability set, ‘21, focused on developing technologies for infantry units. The second, ‘23, builds on the first by adding bandwidth to the Army’s networks and increasing resiliency. The Army is using Stryker brigades as a focus.

The final iteration that will build on the previous two, Capability Set ‘25, will field technology “with a focus on automation and protection.”

The Army developed this iterative setup to give officials more flexibility for procurement of new technologies, Collins said.

The previous version of the network — the warfighter information network tactical future combat system — was not flexible and adaptable enough to keep pace with threats, he said. “So we kind of took a step back and we said, ‘What are some different ways that we can acquire this across some iterative capability sets?’”

The Army expects to have completely overhauled its networks by 2028 with new hardware and software that will revolutionize the way soldiers send and receive information, according to the service.

In the beginning of the year, Capability Set ‘21 was about halfway fielded. It climbed to 70 percent by the end of April. The service plans to fully field the latest capabilities at the end of the year. Before the end of fiscal year 2022, two operational demonstrations will take place in Europe.

While Collins did not reveal which capabilities will be featured during the ops demo, he said it will test the limits of the communications networks.

“We kind of work across the community and make sure what is that representative set so that we can replicate what it would look like both in the operational missions that they would perform, and then also the scale that they would do so,” he said. “Then we can also augment that with some simulation and stimulation just to make sure the network is properly loaded with the necessary traffic.”

The two ops demos will gradually increase in scale and mission complexity from the first demo that took place earlier this year at Aberdeen Proving Ground in Maryland.

Because of current military operations in Europe related to Russia’s invasion of Ukraine, the technology demonstrations will shift with the needs of the operational units, Collins said.

“We’re trying to make sure we can be flexible to the operational units on fitting within their already planned set of mission and training activities,” he said.

Meanwhile, the Army has made enough progress for it to start seeing how different technologies procured through the network modernization effort can work together.

“We’re moving into systems of systems and joining them on an integrated perspective so that it’s not just working in a single box,” he said during the Fort Meyer event.

The integration process will speed up as further tests bring in more data and designs begin for Capability Set ‘25, he noted.

Service leaders hope modernizing the Army’s network will help reduce its command posts’ footprints. Army leaders have been concerned about the survivability of command posts that are placed close to battle zones since Russia invaded Ukraine in 2014. During that conflict, Russian forces were able to quickly find and destroy Ukrainian command posts by using a combination of unmanned aerial vehicles and electronic signature detection.

Some progress has already been made during the path of the first two capability sets by making them more mobile, and therefore, more of a fleeting target. New modular vehicle shelters — like the brigade-sized variant displayed at the Army’s event — break down in about an hour.

While the command post structure has come a long way from the 12 to 18 hours it takes to move a tent-based command post, Maier said the service is still considering how it can make the vehicle more modular.

Soldiers who have used the vehicle-mounted shelters in experiments have noted the significance of being able to charge up radios and other systems while they are on the move.

“That’s some of the key feedback that we’ve gotten from units. They really liked the ability to be up and running very quickly,” he said.

Strategically, the dispersed Army forces of the future could be more survivable, Rey said.

“That’s the key behind this is we want it to be dispersed, so that they’re not vulnerable anymore to any of our enemy attacks and get the entire command post at one time,” he said.

The Army’s network upgrades extend beyond the layout of its command posts. The Army has put more than 90 operational and training Command Post Computing Environments, or CPCE, in the hands of soldiers, said Lt. Col. Shawn Chu-Quinn, Tactical Mission Command product manager.

The CPCE is a software application that is integrated into the command post hardware, she explained. As part of the Capability Set ‘23 fielding plan, the service expects to deliver the software to 100 to 106 units by March 2023.

The application provides a common operating picture on a “single pane of glass” for the command post, she explained.

Collins said having the single pane of glass makes a big difference in reducing mistakes made in battle.

Two different digital environments with two different map backgrounds has the potential to distort situational awareness. That can lead to fratricide, he said.

The computing environment is one of the many components supported by what the Army calls its tactical data fabric, explained Col. Matthew Paul, project manager for mission command PEO C3T.

“We will integrate and productionize a tactical data fabric solution as part of [Capability Set ‘23], leveraging mature components from the Gabriel Nimbus program of record lightweight components that will live on the back end of CPCE,” he said.

The Gabriel Nimbus — a system the Army uses to store and analyze data — will also be integrated with the computing environment to form the data fabric as part of Capability Set ‘23, he said.

Building the data fabric requires pulling data in from disparate, authoritative data sources. The data then has to be cleaned and synchronized between communication nodes in preparation for it being distributed.

“We’re past the science-and-technology exploration phase,” he said. “We’re moving directly into production. [Capability Set ‘23] kind of sets the foundation and then we’re going to build on top of that.”

The first program fully integrated and built in the command post computing environment is known as cyber situational understanding, or cyber SU, which will deepen the Army’s control of its networks. The application allows a commander to monitor the cyberspace domain, network health, threats and posture, all in one place, said Lt. Col. Scott Shaffer, product manager mission command cyber.

The tool doesn’t take cyber actions but gives a commander more information to help guide actions on the battlefield. For example, the application visualizes systems it suspects may be under cyber attack. Then, the operator could investigate the incident and decide how to work around it.

“The whole point being is now you have awareness of the cyberspace domain at the tactical edge,” Shaffer said.

As part of Capability Set ‘23, the application will be delivered to the Army and Army National Guard in the fourth quarter of this year.

While the foundation for the Army’s new networks is steady, experimentation is constant, Paul said. Through relationships called “devops partnerships,” different divisions take updated software for “a test drive” and give feedback for fixes to the software.

As the previous capability sets have evolved, requirements, concepts, maturity and affordability have emerged as top concerns, Collins said.

Affordability is one of the four components the cross functional team said has driven the network modernization process. Collins said some efficiencies have already been implemented that cut down costs.

For example, a squad leader using a two-channel secret classified radio to communicate realized that only a single channel was necessary.

Cost savings was a “byproduct” of making the radio more user friendly, he said.

“It was much more intuitive for the user to be able to operationally employ,” he said.

Plus, using off-the-shelf products saves resources, Collins noted. “What we really want to do here is take commercially available, non-developmental items, and with just a little bit of adjustment, make sure we can harden them for a unique military environment and put them out at scale and at speed.”

“Affordability matters,” he said. Lower costs results in the new technology being deployed quicker to components within the Army so they can modernize faster, he said.