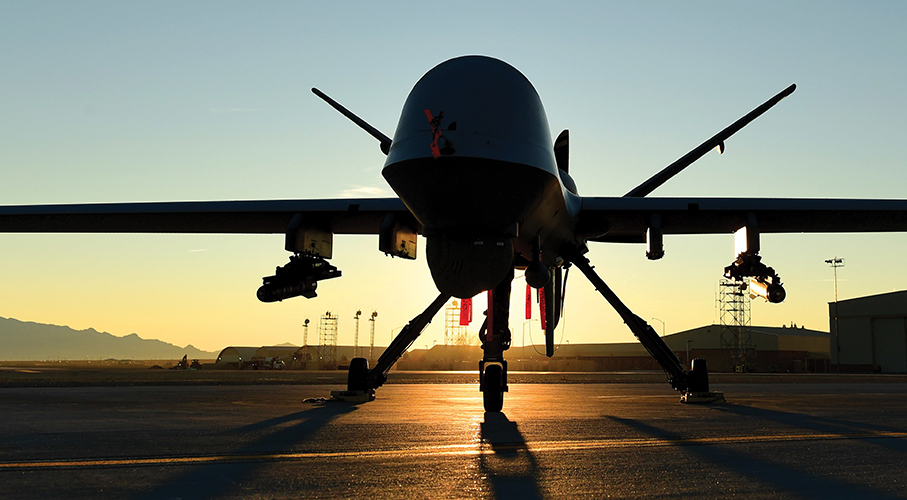 The Marine Corps is overhauling its force to take on peer competitors in austere environments. A new aviation plan ensures that its aircraft — everything from fighter jets to helicopters — don’t get left behind.

In May, the Marine Corps released its latest aviation plan, the first since the 2020 publication of its service-wide strategy for modernization — Force Design 2030, which calls for the service to cut end strength, divest legacy systems and procure new platforms, all in the name of operational flexibility.

The new aviation plan builds on the foundation of the Force Design 2030 vision, highlighting plans for a more agile, expeditionary force.

“While operating from austere, distributed locations and across extended distances, we will be minimally sustained, fully networked and entirely interoperable with the Joint Force and America’s allies and partners,” according to the report.

Lt. Gen. Mark Wise, deputy commandant for aviation, said, “The good news is capability-wise, we got off to a pretty darn good start, and we are pointed in the right direction. I would say that confidently.”

Marine aviation is an ecosystem where all the platforms should be looked at as complements to each other, he said. Force Design 2030 has shown which additional capabilities are needed to integrate into the force, he said at the Modern Day Marine conference in Washington, D.C.

“Making premature decisions is a really, really bad idea,” he said.“ So this [plan] is making sure that we get this right.”

The plan spells out the future for the service’s three main jet fighters.

The F-35 fighter jet is the centerpiece of fleets across the services, and the Marine Corps is no exception. Wise said the F-35 gives the service the flexibility to engage in a fight with the entire joint force.

“So if you take it from a defensive depth standpoint, and you put it in terms of what we’re trying to do, you start with the F-35B and see what it’s been teaching us, not just in how you can employ fire or attack aircraft, but employ them and look at them in different ways,” he said.

The F-35’s strength doesn’t just come from lethality, Wise said. The platform’s ability to build situational awareness with its sensing technology makes it unique in the fleet, he added.

Lt. Gen. Matt Glavy, deputy commandant for information, said the F-35 is a “flying server” and could be key to information advantage.

“But everything that we’re doing in the cloud, masking data, masking computational power, [it’s] all about fusion and correlation of information to generate outcomes and nothing does it better than this airplane,” he said during a panel at Modern Day Marine.

Wise said the rest of the fleet’s aircraft like the F/A-18 Super Hornet needs to catch up to the F-35’s sensing capabilities.

“Making sure that sensor-wise, weapons-wise upgrading the F-18 and the AV-8B in route to that transition is essential, and protecting that capability is essential,” he said.

While the F/A-18 is winding down its use in the Central Command region, it is seeing action in the Indo-Pacific. It’s also a “bridging platform” to the F-35, according to the aviation plan.

“The program will continue to invest in modernization efforts ensuring lethality, survivability and availability requirements of the F/A-18 during operations primarily in [INDOPACOM],” according to the report.

Meanwhile, the AV-8B Harrier fleet is pulling more than its weight until the F-35 reaches its expected potential. The current fleet of 62 aircraft, or four squadrons, is fulfilling the operational commitments previously filled by seven active squadrons, according to the aviation plan.

Despite the workload, service officials are not predicting operational constraints during the transition time to the F-35.

“Airframe fatigue life and flight-line inventory are not a current problem, and are not forecast to be through the transition to F-35,” according to the aviation plan.

Another aircraft that is playing a different role in the future fleet is the MV-22 Osprey. The platform is still a “game changer” for the Marines even though the tiltrotor aircraft has been deployed since 2007, Wise said.

“You can build operational tempo like that, like nobody else can, and it continues to excel and allows our wildest expectations to be met and exceeded,” he said.

Force Design 2030 reduced the end strength of the platform from 18 active squadrons to 14, according to the aviation plan. However, the platform needs upgrades to keep up with needs in a contested environment.

The digital night vision improvement program will be integrated with a helmet tracking and synthetic virtual environmental capability that can “provide pilots with an ‘outside’ scan capability” in a degraded visual environment, according to the plan.

Wise noted the service also uses the platform as a testbed for emerging capabilities.

The Marine Corps also flies three main rotary wing aircraft that serve a variety of missions. The CH-53K King Stallion is crucial for resupply missions and personnel transport in the fleet. It is the latest upgrade of the CH-53E rotorcraft and provides “three times the lift capability” of that platform.

“Everything that it’s been touted — it is all of that and more,” Wise said about his recent flight in the aircraft.

The aviation plan revealed the intention to begin the transition to the King Stallion in fiscal year 2022, while sustaining the CH-53E until the new fleet is completely online in about fiscal year 2030. During that time, three squadrons will deactivate for a total of five and a quarter active squadrons, one reserve and one fleet replacement.

“The ability for that thing to get into contested landing zones very quickly or getting into brownout conditions and getting off the ground quickly because the automation is spectacular,” he said. “The way I judge that is an F-18 guy flying a CH-53K and not making the crew scream — pretty good.”

The service is weighing replacement systems for the aging Bell AH-Z Vipers and UH-1Y Venoms, but Wise noted the legacy helicopters are still critical to the aviation fleet.

The UH-1’s sensing and information sharing capabilities are still useful even as the program halts future procurement.

“That platform is still essential to all of our capabilities, especially when you’re talking about close contact out in the battlespace no matter where it is,” he said. “So that’s one we’re spending a lot of time and attention to make sure we get right. There’s a lot more work to do there.”

One upgrade is adding Link 16 software — a tactical data link software — to both the Venom and Viper platforms. The Marines demonstrated the data link between a AH-1Z Viper, a UH-1Y Venom and a portable ground station in November 2021, according to a June press release.

“Improvements leveraging technologies from multiple sources, to include Future Vertical Lift (FVL) family of systems, will increase capability ensuring lethality and combat readiness at an affordable cost for decades,” according to the aviation plan.

As for fixed wing airlift, the KC-130J Super Hercules remains the service’s mainstay. The service is building up capacity for the aircraft and hopes to have a fourth active duty squadron by 2026.

“Obviously, a lot of work going on to make sure that stays on track, but that capacity for mobility and sustainment is essential for operational lift out in the Pacific and anywhere else for that matter,” he said.

While the aviation plan reported an “upward trend in material and operational readiness across the fleet,” the F-35B and KC-130J tanker rates have been exceptions to the increase. For example, during fiscal year 2021, the F-35B’s readiness rate decreased from 67 percent to 63 percent.

On the uncrewed aircraft side, the aviation plan outlines the potential for more MQ-9 Reaper drones.

The service sees its MQ-9 Reaper being instrumental in future conflicts where communications are constrained, Wise said.

The platform will also receive upgrades such as auto take off and landing, airborne early warning radar and electronic warfare support payload, according to the aviation plan.

The aviation plan notes that the Marine Corps will maintain two active squadrons and one training squadron of MQ-9s through the end of 2025. Officials are weighing the addition of three more squadrons.

“It’s, of course, no secret that we’ve been looking at where and why should we expand the unmanned aerial squadron side of the house to the Marine Corps,” he said. “And one thing we’ve done, since Force Design has really been taking shape over the last three years, is it’s given us a chance to look at different opportunities for how we might do that.”

While the MQ-9s would support reconnaissance and intelligence missions, the service is also looking at logistics support drones. The aerial vehicles could carry a few tons of payload and be able to navigate loading and unloading “to free up in demand sustainment systems for particular missions that require that kind of capability,” Wise said.

“I would say the unmanned logistics system is one great area of opportunity,” he said.

However, when it comes to uncrewed systems, the aviation plan reveals a disconnect between rhetoric and investment, said Mark Cancian, a senior adviser with the CSIS International Security Program and a retired Marine.

He pointed to comments from the Marine Corps commandant that suggested that unmanned aerial vehicles could be a more affordable platform to offset costs of expensive aircraft like the F-35.

“The clear implication was fewer F-35s, more unmanned MQ-9s or whatever. And we’re not really seeing that,” he said in an interview.

The F-35 program has been one of the most expensive procurement programs in U.S. military history. The fighter jet has made headlines in recent years for costing billions of dollars more than its expected price.

The “extremely modest” 18 MQ-9 increase proposed by the service is a “step in the right direction,” but is still far behind the Army and Air Force, Cancian noted. The service requested $484 million for the drones in the 2023 budget proposal, but only has two of the aircraft in its fleet currently.

Another problem is that while the aviation plan supports procurement of new aircraft, the pace is too slow, Cancian said.

“They have to buy a lot more airplanes, and Congress will almost certainly add some aircraft, but long term that’s of great concern that the five-year projection for the Marine Corps for all the services just doesn’t support the inventory that it has,” he said.

Ultimately, Wise said he needs help from industry to innovate and cut down on maintenance. He said if platforms can become less likely to break down in the field, the Marine Corps can cut down on sustainment costs.

“We have to push the limits and continue to improve the reliability of all the platforms out there, so I need your partnership,” he said. “Quite often, our partnership with industry will help us get to some place where we didn’t exactly see the solution that way, but it ends up being even better because of it.”

The need for change is urgent, Wise said. Adversaries have had more than two decades of U.S. global operations to take note of the military’s strengths and weaknesses.

“They’ve been learning. They’ve been evolving and they’ve been building up capability and capacity, and it’s only accelerating,” he said. “So, we don’t have any time to waste.”