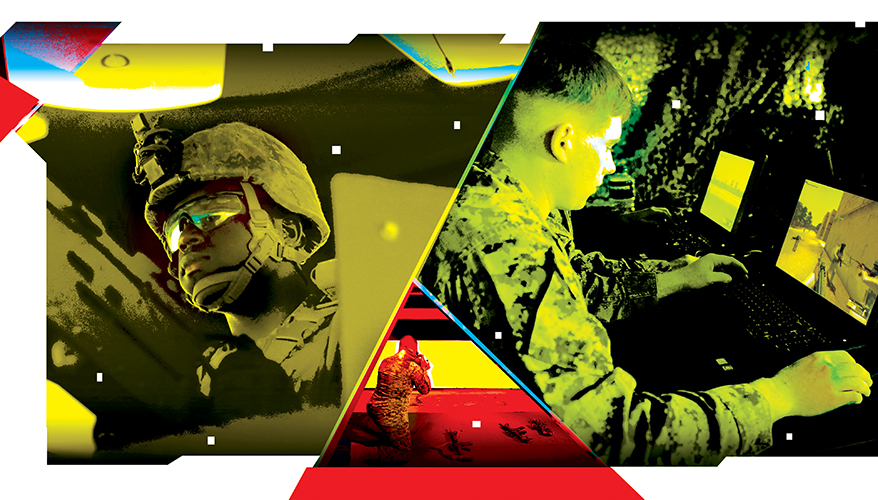 ORLANDO, Florida — In 1805, U.S. Marines battled Barbary pirates on the shores of Tripoli. Today, Marines are engaged in a far more ambitious Tripoli campaign — an effort to build a live, virtual and constructive training environment — that officials say will take years to complete.

After more than a decade of concept development, the Marine Corps launched Project Tripoli in April 2022. It is a live, virtual and constructive training environment, or LVC-TE, that will “provide architecture and integrate, employ and train all of our advanced concepts and capabilities across our force and the joint force,” Lt. Gen. Kevin Iiams, commander of the Marine Corps’ Training and Education Command, said at the National Training and Simulation Association’s annual Interservice/Industry Training, Simulation and Education Conference in Orlando.

“We see a synthetic capability that blends all of our force-on-force training systems, our simulation and our simulators such that … we’re not just training our individual Marines in our units, but we’re training decision makers with AI to the high-end,” he said.

The objective is to train to the Marine Corps’ Force Design 2030 modernization plan, he continued. That plan seeks to reorganize, reequip and retrain Marines for the Indo-Pacific theater. Hence, training systems need to evolve, he said, so that “when we do have the next fight, and it is coming, that we’re actually going to be ready, relevant and capable for that fight.”

Given the present state of the Marine Corps’ virtual and simulated training systems, it will be a long march.

Currently, the service has a mix of legacy, non-networked, non-standardized training systems at facilities around the world that allow Marines to get some “reps and sets” in mission activities like convoy driving or small arms training, Lt. Col. Marcus Reynolds, program manager training systems, said in an interview.

“With LVC-TE, we’ll have the ability to connect [Marines] into the same environment,” he said. “So, you can take the next step for training — for not just getting some reps and sets — but maybe you can start supporting an operation and connect multiple convoy trainers or driver trainers into a convoy and drive supporting a unit that’s in Twentynine Palms while they are in other parts of the nation or overseas.”

The end goal is a common operating environment and modern simulations that can link forces around the world into real-time exercises the way video games like Fortnite do, he said. Based on what his team saw at the conference, much of the technology that could support connected, multi-domain LVC training is already out there.

“There’s some really good niches where they’ve done some really good stuff, and they’ve kind of incorporated everything from the individual warfighter … even up to a platoon and company level,” said John Taylor, deputy program manager, training systems.

“But again, you get to, ‘Okay, that looks really good at this level, how scalable is it? Can it be big?’” he continued. There are other challenges, he noted, such as networking aviation simulators, developing cross-domain connectivity and dealing with latency.

“I think we’ve done a lot of market research this year, and it’s been pretty eye-opening of some of the capabilities some of these companies have got out there right now,” Reynolds said. “And they’re interested in partnering with the [Defense Department], which is great.”

However, it’s not that simple. “Now, to get everything that they have, that we would love, that’s going to cost quite a bit of money, so we had to do it economically,” he said. The budgeted approach is iterative — take incremental steps to update and connect existing technology rather than purchase a new environment and platforms.

Like something out of Star Trek, the first major step of LVC-TE is creating a universal translator that can link together legacy simulators that were built with different source codes, he said.

“It will translate that code and data into a common operational picture, which eventually will also add in layers of assets of our red force that’s simulated, sort of bringing in the constructive part of LVC-TE,” he said.

In addition to developing the translator, the Marines are working on upgrading outdated tools like the Marine Air-Ground Task Force Tactical Warfare Simulation.

“We have a program that right now that’s with the Air Force office that’s basically upgrading the code on that,” he said. “With that, we’re doing the architecture modernization, hardware reduction, database optimization, algorithm optimization and then improving the user’s experience.”

That will allow it to network with other simulations through the translator and facilitate more complex virtual training in the short-term, he said. Eventually though, the systems that are part of the “initial federation of legacy systems” will retire, said Taylor.

“We have a plan to transition from the legacy to the open system architecture … so we don’t get stuck where we’re at now,” he said.

Based on comments from Marines at the conference, the Tripoli transition can’t happen nearly fast enough. Marines constrained by the limitations of existing ranges and training systems are eager for collective, virtual training.

Maj. Brent Birchum, operations officer in the 3rd Marine Raider Support Battalion, served in Iraq in 2017. He recalled a clearing operation against ISIS in Mosul with U.S. and Iraqi forces maneuvering with armed air assets.

“So, within that scenario, I thought it was probably the peak pinnacle of what a battlefield commander would have to balance out — that ability to collect, identify threats moving into the area in real time, while battle tracking and simultaneous clearing through the area,” he said.

He subsequently worked with the Air Force Research Lab and Marine Corps Special Operations Command, which have simulator capabilities that can replicate much of what he experienced in Mosul.

“And where I think that there’s a lot of opportunity for improvement is getting intelligence infused into that virtual environment,” instead of having instructors script and roleplay that, he said.

Developers need to be thinking about how to replicate intelligence reporting and concepts like target confidence into simulations, he said. “So, it’s building out those layers of complexity for the training audience.”

He likened current simulated training to a football team practicing drills from the 2-yard line. “You can get a lot of good reps and sets out of that,” he said. But it would be better “to move the ball back to about the 50-yard line, where you’re really having to develop that scenario for the commander to make those decisions,” he said.

In addition to incorporating more intelligence tasks into simulations, there is a need to rapidly replicate operating environments, he said.

“I think we’re getting a lot of good information about what a peer-to-peer fight would look like. It’s the ability to then replicate that in a virtual environment and then utilizing that in our wargaming efforts,” he said.

Other Marines highlighted the need for networked, distributed and collaborative training since many current systems are single user.

“We know where we need to go and we know we’ve got a long way to go there,” said Reynolds. “We’re trying to get some small steps done so we can truly understand the potential and … where the future requirement is saying that we need to be.”

Project Tripoli will evolve through minimal viable capability releases under the software acquisition pathway, he said. The first was supposed to take place in fall 2022 but has been pushed back to April 2023.

“I know that our leadership wants us to go a little bit faster,” said Reynolds. “But we’re probably at least a couple of those releases away from figuring out, are we on the right path?”

“And this first phase is really just the boring part,” he continued. “Because you’re really getting the code in there, doing the translation services, seeing the issues that you’re running into.”

That means the first demonstration of the capability is not going to be exciting, he said. “This would be like, ‘Hey, this is where we’re at, and this is all the things that we’ve learned, and here’s the things that we think we need to bring into it to help us get to the next step.’”

The program is looking to purchase hardware in the fourth quarter of fiscal year 2023. It is currently funded under a task order within the Army Consolidated Product Line Management Plus Program. General Dynamics Missions Systems has an eight-year, $883 million contract with the Army for that program.

In fiscal year 2023, Tripoli is set to receive $9.4 million for research and development with another $13.2 million set aside for procurement and investment, according to the program manager. Reynolds said that as of early December, the continuing resolution had not impacted progress on Tripoli. However, if it is extended, it could hinder future phases, he added.

Assuming the funding is stable — and the requirements remain stable, which has been a challenge so far, he said — the Marines will still have several challenges to sort through, ranging from ensuring the system meets latency targets to storing and managing the volumes of data that will be collected and generated by the training environment, he said.

The Marines are also keeping an eye on the other services as they march on Tripoli. They are regularly conducting engagements and reviews with the Army and Navy, he said.

“We’re getting updates on where they’re at with their programs, and they also see where we’re at,” he said. If one of the other services is in a better place with their live-virtual-contructive environment, “we will fully jump up and join them because we’ll get there faster and maybe have a better product.”